Hurray for PartyMarty and Pirate_Kate being able to go out before the twins are born!

PS- I've always liked the name Kimberly for a girl. If you'd REALLY like to show your appreciation.

It's better than a slap in the face with a frozen codfish.
Top

2 consecutive days off with nothing planned for the first time since November. Yes! I mean, hurray!
Top

Yay; my blu-rays arrived from Amazon.co.uk

The Ultimate Bourne Collection (Identity, Supremacy, Ultimatum)
Watchmen - Director's Cut
Gladiator
Gone with the Wind - something for the missus

All in High Definition - this is going to be a good week!

Spring is here!
When in charge ponder. When in trouble delegate. When in doubt mumble. When asked to clarify, say "Trust me".
Top

I'd forgotten how satisfying it is spending a Sunday morning with a power drill! Finally got round to doing things that had been bugging me for 3 years. Very satisfied

Today I have on my iPhone the very first app that I had a hand in writing.
scribble.
Top

What is it called?
Top

Not available on the App store since it is still a beta.

It is a non-serious record keeping app for tracking those moments in your life when uScream. 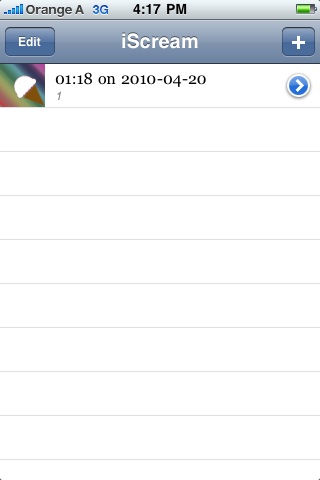 And also a reminder of how you got to that point. 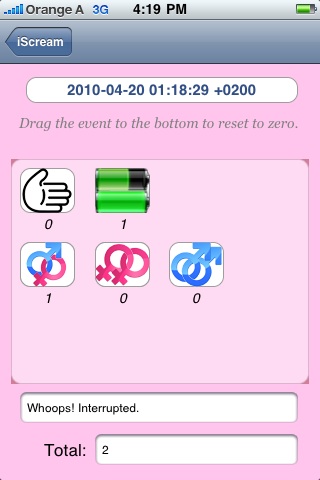 And remember, I just write code. Someone ELSE is responsible for the concept. Although I do admit to helping out with some of the funny comments (not shown here).
scribble.
Top

I'll bring it along to the German conversation evening....

Say what?
80% of being smart is knowing what you are dumb at, author unknown
Top

Anyway, I hope you pissed in your boss's coffee!

Good luck with a new one.
Top

Working for an English "school" that would throw me contract-based jobs every over month or so and only paid me €12/hour. The wage wasn't that bad since I didn't have to do the legwork in getting the job and could use that time towards my studies. Not really a mitigating factor, though. I had two bosses and the one I spoke with thought she had full control of the company, but in reality it seems the other did. She used to call me up and would talk my ear off and complain about whatever was making her angry that day and vent. Typically not fine if you're a friend, but she wasn't a friend and she had a habit of calling late in the evening.

What led to said firing, however, was the latest contract I had. It was this 16 year old Turkish student who is failing almost every class he is doing because his English and German are both horrible so he came to us for language help in both languages. We set up 6 meetings about 2.5 weeks in advance and during this set up he got mad because one of his suggested appointments didn't fit my schedule (I had a test, can't really get out of that one). Then he cancels another appointment or two shortly thereafter and then a week, week and a half before we were supposed to meet, I found out a second test that should have been in the afternoon was now taking place at exactly the time we were supposed to meet. I obviously had to cancel. A day later I get an angry phone call from his sister, who is paying for his lessons, and she says I have been canceling a number of appointments and calling me a bad person. I then have to call my boss and defuse the situation and she believes me and I send her all the emails I had exchanged with this kid to prove I was telling the truth and this kid and his sister are spinning everything around and blowing it out of proportion. 5 days later or so I get an email from the other boss saying my services are no longer wanted or required.
Top

My son likes The Doors! I put a CD on and he immediately started dancing and singing! So Awesome!
...and we had the idea, that if we were really good, God would permit us to be pirates." - Mark Twain
Top

9 weeks since being told I'm fired.. 9 long long weeks of working here. Last day today! HURRAY! I'm getting drunk..
I'm just like every modern woman trying to have it all. A loving husband, a family. I only wish I had more time to seek out the dark forces and join their hellish crusade. That's all.
Top

Sorry to hear the news,did not know. Hope everything turns out well.
80% of being smart is knowing what you are dumb at, author unknown
Top

so why did you get fired?
Top

In the end it will work out for the best..
I'm just like every modern woman trying to have it all. A loving husband, a family. I only wish I had more time to seek out the dark forces and join their hellish crusade. That's all.
Top

T in your endeavor tonight, may you have much success. Make sure you have plenty of H2O in the morning with a healthy dose of aspirin.

We will keep our fingers crossed over here that better things will come along.
80% of being smart is knowing what you are dumb at, author unknown
Top

Thanks Snowdog.. Things are looking good!
I'm just like every modern woman trying to have it all. A loving husband, a family. I only wish I had more time to seek out the dark forces and join their hellish crusade. That's all.
Top
Post Reply
3913 posts

Return to “Meet the People”